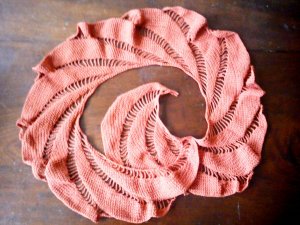 This pattern was inspired by the Octoberfestdoily by Denise Owens. I wanted to make something special for my sister’s birthday. She likes simple elegance and warm tan/neutral shades so this was a natural choice.

The thread I used is quite a heavy thread from the Handweaver’s Studio and Gallery and it’s 50% cotton 50% linen. It is quite soft and has a nice rough texture that adds interest to the simple pattern. About 400m of similar weight thread should get you somethign a similar size. I used a 2mm hook.

British notation is used. EDITED TO ADD: British double crochets are the same as American single crochets. Tension is not important.

Continue this stitch pattern until the scarf is the width that you are looking for.

EDITED TO ADD: Lots of people have asked in the comments what I mean by this and I apologise for not have clarified sooner. Each row you’ve worked so far has involved dc sections and chain sections. The chain sections stay the same length, the dc sections each get one stitch longer every row.

So on odd numbered rows you are working two dc stitches into the beginning of each chain loop on the row below and then skipping a stitch at the beginning of the next dc section. On even numbered rows you skip a dc before each chain section and work two dc into the chain loop on the row below after it. Using this pattern you continue to grow the dc sections as long as you want. I hope this helps.

Be aware that every row increases the length as well as the width. I did 35 rows. 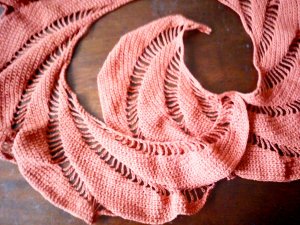 Final row should be an odd numbered row.

I chose not to block this scarf as I liked the way it was hanging already. You may decide yours needs blocking but I imagine the spiral shape  may make blocking tricky.

I am more proud of this pattern than anything else I’ve done. It feels like a big step up from some of the other things I’ve made.

As ever comments and questions are welcome.

EDITED in response to a question:

dc2 in loop = 2dc in loop created by the six chains not in any particular stitch. Sorry for lack of clarity!