Pigs’ cheeks – or what happens when I shop at Waitrose

Posted: 07/04/2011 | Author: quincetart | Filed under: Ingredients, Recipes, Recipes by the book | Tags: braised, main course, online recipe, simmered, slow cooked, smells amazing for hours before you can eat it, you ate what? | 4 Comments

A few years ago my fella gave me a copy of Fergus Henderson’s Nose to Tail Eating I’ve made a couple of things out of it, with limited success, but it’s definitely inspired me to be a bit more adventurous with choosing cuts of meat. As I think it has everyone.  It also fits with my philosophy that if you’re going to cause an animal to be killed for your eating pleasure you should have the good courtesy to eat as much of it as is edible. Now I have to confess to having limits on this personally. I’m not a huge fan of tripe. I’ve yet to be able to bring myself to eat brain or sweetbreads. I’m not keen on kidneys. So saying I’m well up for liver. I think heart is absolutely delicious. I have enjoyed a pig’s ear and snout when roast.

So when Waitrose had a packet of what turned out to be seven cheeks for £1.37(!) I was straight in there. Good call, Quincey! It turns out pigs’ cheeks have the tenderness and flavour of pork belly without the thick strip of fat on the outside. Mmmmmm…

Henderson’s recipe called for the cheeks to be brined for three or four days and frankly I couldn’t be doing with that so I did a quick internet search and came up with this recipe. Another good call. People this was a serious hit.

Now I did fiddle a little bit but not so you’d notice. So here are where I cut corners:

The recipe calls for the cheeks to be seasoned floured and fried. I have the fear of salting meat too early in the braising or stewing process and making it tough so I skipped the seasoning. 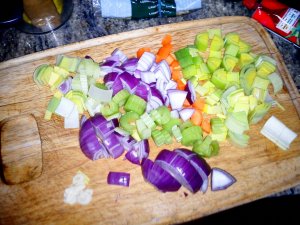 I used red onions because that’s what I had to hand. I also played fairly fast and loose with the quantities of vegetables. I was already making a funny amount because I had seven cheeks so I wasn’t going to be overly fussy about making sure I had everything too perfect.

I didn’t   brown them either I just let them get to being really soft and the onion to being transparent and clearly well cooked.

I didn’t have caraway seeds, I had aniseeds so substituted those. I may have used slightly less than the recipe would have demanded if scaled up for seven cheeks exactly but seriously it looked like a lot of aniseed already and it’s pretty potent stuff.

I went for a run with my half marathon buddies while it was all in the oven so it may not have had exactly four hours. It might have been slightly over. As if that makes a difference.

We had a nice run though. It’s been a very beautiful spring here in London. All sunshine and daffodils and birdsong. After a grim old winter and a shockingly bad summer last year we’ve earned it frankly.

It was still quite cool and brisk when I made these (this post is a couple of weeks late I’m afraid) now it’s almost summery so I’m not sure you’d want to make them unless we have a cold snap. Still I feel I should get the post up now or I never will. 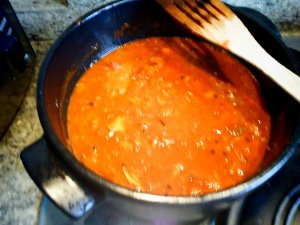 Before they went in the oven

Of course I came back from the run absolutely ravenous. I had some mash ready to heat up with them and washed some baby spinach to go on the side.

I did not bother to strain out the vegetables. I mean come on! Really? Chuck out all those lovely simmered down veg?

So this is what it looked like when all served up… 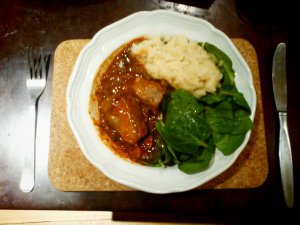 I was surprised at how well the flavours blended. I would never have put aniseed in with tomato before but they melted in together and the result was warm and subtle and smooth. This was one of the nicest things I’ve made in ages. Posh comfort food. The kind of thing you’d get in a really good gastropub. There being so much of it I had some more with a friend the next day and froze a portion too.

I will definitely be buying these again. The only trouble is, that means going to Waitrose and I always end up spending three times as much as I mean to when I go in there.