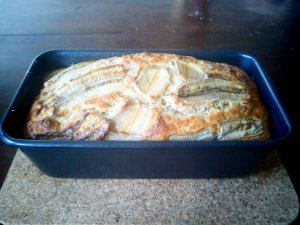 Unexpectedly (unexpected by me anyway) I returned home from my first 10K run the other day with a massive bag of overripe bananas… as well as jelly legs and the hunger of the righteous. Honestly if there’s a freebie going you know I’m going to be in like Flynn.

So I wasn’t a huge fan of bananas until I started running when I was introduced to their mystical energising properties. One of the things I always had a problem with was the shopping issue. If I wasn’t running I’d want to eat one banana about every three to four days. That’s exactly the wrong length of time for my greengrocery cycle which tends to be every five days or so, and bananas’ ripening time which is too bloody quickly. I like bananas practically green for preference but they don’t stay that way for long and they certainly don’t stay that way in my very warm flat for four days. And I feel like a fool going to the shops just to buy a solitary green banana every four days.  Humph! (Listen to my first world problems…)

Anyway, the run was a ball. My buddies and I stayed together and as a result were right at the back, but since it was a training run and not a charity run, we were up against some serious runners. One boy in particular seemed to sprint the entire thing, lapped us twice and was way ahead even of the rest of the best! The whole thing took place on a lovely cool but sunny morning in Regents Park. The horse chestnuts were out. A gentle breeze blew. We saw the camels in the zoo.

When we finished the nice mumsy ladies  at the water stand (like a much fitter version of the WI) were giving away bananas. Of course we each had one but they had over ordered by a couple of boxes and were desperately pressing them on everyone who walked by.

“Y’okay.”  Thought I. I returned home with about twice as many as I needed.

Then I had a busy week and nothing got done. I made pre-run smoothies with a few of the nanas. (One banana, a handful of grapes, a nectarine and a slosh of apple juice. Mmmmm….) But eventually I had to just go for it and make the bread.

There’ s a recipe on the BBC which I’ve used before but looking at it I decided it was a bit too sweet. I wanted something slightly plainer and I wanted some spice in it.

So this is my version…

Now I may not have baked mine quiiiiiiiite long enough even though it looks a little burned in the photo at the top that’s just the photography! It has cooled and been a little over sticky. But otherwise it is just great. The nanas on the top look great I think you’ll agree. For those who want a more cake-like sweetness the original recipe calls for 250g of sugar so anywhere in that range will be tasty.