Jelly Whip – or why I should trust my instincts

Proportions are funny things. It’s easy to get the a little wonky. And sometimes it’s even easier to get them a lot wonky.

I’m sitting here eating a sort of home made gelato. It wasn’t what I set out to make but it tastes quite nice and frankly I’m happy to have rescued my recipe so that’s all good.

You want to know the  story of how I came to be eating an unintended gelato? Are you sitting comfortably? Then I’ll begin.

My darling mother told my darling sister and me how to make jelly whip not so long ago when she was up in town. It sounded good. She subsequently emailed a recipe which goes as follows:

A 1 pint mould or dish

A variation – before stage 2: pour a quarter of the jelly into the serving dish and leave to set.  Continue as above and turn out the whole thing set with a clear layer atop and decorate with fruit.

Being my mama she entitled her email “jelly whip” and started it with the phrase “Let’s see what your spam-check makes of that title.” ! I love you mum! 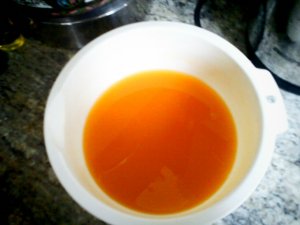 It sounds like a piece of cake to be honest and readily open to adaptation so I thought I’d have a go at the posh version. I had a tin of evaporated milk in the cupboard so I stuck it in the fridge overnight. I coudn’t remember ever seeing a smaller evaporated milk tin,  this one was regular tin sized so I assumed that’s what the recipe meant. Ahem.

I wanted to make a peach jelly so I bought some peach juice from the corner shop and set to with the gelatine. I got the quantities a little off using the full pint of peach to make the jelly but I reckoned that would probably be ok. BTW I should emphasise the importance of not playing fast and loose with the instructions on gelatine packets. You can end up with some really nasty stringy, lumpy, goopy messes if you do. Even I try very hard to stick to the rules with this stuff.

While it was setting I went for it with the whisk and the tin of milk. Not every recipe I make involves whisking but somehow I’ve been doing quite a bit of it lately. Things come in phases I guess.

I was pretty amazed by how much volume can be created so easily in this process. The milk fluffed up like nobodies business. It was fun. But I began to become a little concerned…

Because I realised that of course this was not a small tin of evaporated milk. This was probably double the size of a small tin. As I whisked some more and the milk expanded further I thanked my lucky stars for the size of my mixing bowl and started to worry properly that I hadn’t made enough jelly to properly flavour and set the milk.

When I whipped in the jelly I knew I was right. There was barely any flavour except a slight souring of the milk.

I didn’t have much more peach juice and I didn’t trust it to provide enough flavour anyway. I needed to think of something else. Meanwhile time was ticking and what I had already made was setting.

I rifled through my various cupboards rejecting spices and colourings and inappropriate alcohol until my fingers grasped a bottle of almond flavouring. Aha! I don’t know if you’ve had fruit- almond combinations but can I recommend amaretto and orange juice as a good way to start exploring them. Add a good dash of lemon juice if that sounds too sweet.

I made up another jelly with the remaining peach juice and poured in a goodly splash of almond flavouring. I poured it slowly at height into the milk to help cool it on its way in. In it went but the flavour was still too mild.

More almond. Still not much flavour. More almond… meh, stil a bit bland. More almond and now I’m worried about overdosing on almond essence, but at last I have something that tastes good.

Oh and I should also mention, could fill a small bathtub. 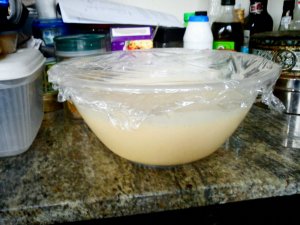 Yes, in my drive to finish making the stuff I had left aside all sense of proportion and allowed myself to create a dessert that would occupy 3/4 of the space in my fridge.

Clearly it was time to call in the professionals.

Once it set I got on the phone to my sometimes fella and put in a plea. “I need my fridge back! Will you help?”

He was on the bus practically before I’d finished the call.

Between us we got through about a third of it straight off.

That sounds like a huge amount but it really is mostly air. His comment was that he had never eaten anything so light and fluffy. I blended some frozen berries to go with it which was a good call. (Sorry no pictures of this. It was yummy and we snaffled it before I remembered to take any.)

When he left I packed him a boxful to take home. It was set quite successfully and didn’t collapse on the journey.

I wasn’t sure I could eat the rest before it went off but it occurred to me that it might freeze ok. And I was right. It’s slightly chewy compared to, say, ice cream, but still very nice.

I definitely want to try to make this again but next time I will definitely search around for a small tin of milk. I will also use a stronger flavour of juice to make the jelly. Cherry I think would be nice or perhaps ditch the juice altogether and make it with coffee.

Anyway, I will get back to my thawing pudding and look forward to hearing about your last minute rescues. What have you made that required quick thought and a splash of something out the cupboard to sort it out? Tell me in the comments.